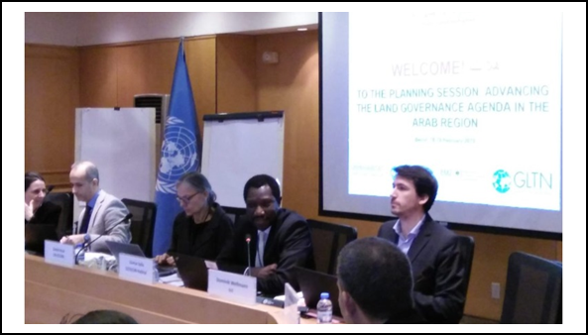 Conversations on land governance and how to enhance it in Arab countries were at the center of discussions during a two-day planning meeting in Beirut, Lebanon, a follow up from the first Arab Land Conference held in Dubai, UAE in February 2018.

Participants from different land sector actors presented and discussed their work and strategies and identified synergies for the way ahead. The meeting was organized by the Global Land Tool Network (GLTN), UN-Habitat and the World Bank with support from the German Federal Ministry for Economic Cooperation and Development (BMZ) and United Nations Economic and Social Commission for Western Asia (UN-ESCWA).

On the first day, participants identified and presented the priorities of their respective land initiatives in the region. Some of the initiatives debated in detail were the Network of Excellence on Land Governance in Africa (NELGA), particularly the North Africa Node, and the recently formalized collaboration between BMZ and GLTN around the “Arab Region Programme on Good Land Governance in support of Inclusive Development, Peace and Stability”.

The second day saw the group carry out prioritization of upcoming interventions, including capacity development, research, coordination among the organisations and institutions working on land governance, awareness raising and schedule of upcoming events such as the second Arab Land Conference, the Arab Round Table at the World Bank Land and Poverty Conference, the Land Administration Forum and the Global Land Forum. Several key priorities were agreed upon including:  establishing a baseline for land governance in the region, undertaking a regional study on policy and legal frameworks and on root causes of conflict, map centres of excellence on land governance and carry out a capacity needs assessment on land governance in the Middle East – complementing the NELGA work in North Africa.

Gisela Nauk, Chief of the Inclusive Social Development Section at UN ESCWA noted that “the meeting has been a great learning experience for ESCWA, and we are looking forward to enlarge the collaboration and to continue discussions between UNESCWA and UN-HABITAT”.

The way forward will see the creation of linkages and better coordination with the governments. There will also be an enhancement of knowledge exchanges and cross learning; more efforts in data collection and monitoring land governance and land tenure security interventions; a better use of technology in support of inclusive land governance; an expanded collaboration with UN-ESCWA and the preparation of the second Arab land conference.

Oumar Sylla, Unit Leader of GLTN at UN-Habitat, stressed the importance of the Arab Land Initiative to create capacity at country level and raise the profile and enhance the visibility of the issue with governments. Wael Zakout from the World Bank praised the efforts made since the Arab Land Initiative was established in Amman in 2016, thanks to a structured and sustainable with UN-Habitat and GLTN. A more detailed road map for the Initiative is to be consolidated in the days that follow the meeting and will be shared with partners and upon request by the GLTN Secretariat.

The meeting was a chance to share with the partners the first copies of the Arabic version of the publication “Women and Land in the Muslim world”, which provides guidance on how to improve women’s tenure security as an essential element to ensure sustainable development, peace and the realisation of human rights.